Last week, I drove out to Lockhart, Texas, with my mom for a book event.  The library in my new book, Get Lucky, is based on the historic library in Lockhart–the oldest library in Texas.

It was so amazing to get to stand in the library that had sparked so many ideas in my head and read from the book there.  Though the library in the book is shabbier than the well-cared-for library in Lockhart–had to be, for the plot. 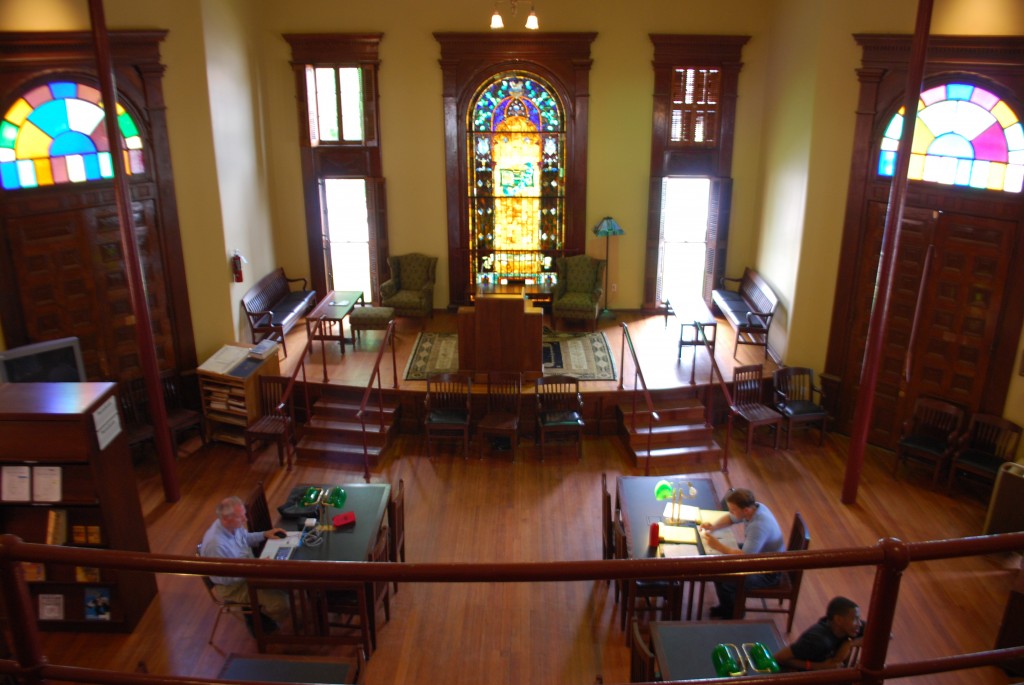 Here’s the excerpt I read in Lockhart, standing in this library, in front a a stage where Willam Taft once spoke.

The truth is, by the end of the morning, I would be very grateful that I hadn’t beheld the building for the first time in a tiny picture on a page.  I don’t know how I had managed to grow up in this town and never once visit this library, but until that morning, when we all drove over together to visit, I had never seen it.  And as tired as I was after my late night, and as warm I already felt in the morning sun, I will never forget the moment I lifted my eyes up to that building for the very first time.

I must have been the only person in the group who hadn’t seen it before. Everyone else climbed out of the caravan of cars we’d driven, gathered up cell phones and blackberries and notepads, and headed in, heads down.  But me, I stopped still on the walkway.  I leaned my head back and my mouth fell a little open.  I felt a tickle, almost a shyness, in my chest, the way you might if you suddenly bumped into a movie star at a cocktail party—some mixture of surprise, and delight, and the self-consciousness that remarkable beauty inspires.

I’m not sure if I can describe the building.  I’m not sure a catalog of its details—the red brick, the balustrade, the limestone carvings, the stained glass—can do it justice.  Later, Howard would describe it to me as a Classical Revival Greek cross plan with vaulted pavilions forming the arms.  In fact, I’d collect all sorts of words to describe it, like pediments and entablature and pilasters.  But really, in the face of something as solid and as heroic and as real as that building, words are just a little thin.  It’s like trying to sum up the Parthenon.  What would you say? It has tall white columns, and lots of carvings, and it’s really, really big.

One thing I can say: seeing this library knocked the wind out of me.  The way the look of it created the feel of it:  The shine of that old wavy glass in the windows.  How the bricks and trim and stone all came together and made it more than just what it was.  The scale, which managed, impossibly, to tower over you and welcome you, to feel both enormous and cozy, both regal and kind.  It rose up out of the little park of St. Augustine that surrounded it:  Its feet so firmly on the earth, but its octagonal dome and widow’s walk railing brushing the sky.

That said, it did need some work.  The paint was peeling, the gutters were sagging, one of the massive stone ball finials had fallen off and was resting in two cracked pieces by the entrance.

Howard did not fail to notice me gaping.

“You’ve never even been here, have you?”

“Of course I have,” I lied, falling in line behind him.  And then, “A long, long time ago.  So long ago I can barely remember.”

Later, Howard would walk me through the photos we’d take that day and explain the architectural principles that made the building what it was.  How the shapes and angles all played off each other and made relationships that were pleasing to the eye and soothing to the soul, how the arrangement of windows and columns and doors could speak to primal human needs for safety and order and connection.  By the end of the day, I would be starting to understand the psychology of the architecture—not just that it was beautiful, but why.

But at the time, all I knew was that the experience of standing before this grand, slightly neglected building, somehow, in some way, made me want to be a better person.